Mrs. Britten's English Zone
Note to readers:  Some words you may not know are linked to easy-to-understand definitions in Merriam-Webster's Learner's Dictionary.  Feel free to visit the dictionary to explore any additional words that are new to you.

"The Celebrated Jumping-frog of Calaveras County" by Mark Twain

Calaveras County is a county located in Gold Country in the state of California.  "Gold Country" refers to a geographical location in central and northeastern California where gold mining was one of the main attractions in the mid-1800s.  Immigrants from the eastern United States moved west to seek their fortune -- or their fate -- in the gold mines.  Below you will find information that will help you to build background knowledge about the setting and characters of the story.

"The Celebrated Jumping-frog of Calaveras County" is set in a fictional mining town.  Mark Twain was probably inspired by real-life people and places in California gold mining history when he chose the setting for this short story.  You can see a map of some real California gold mining towns and read a short history of how gold-mining affected California here.  This article from the Oakland Museum of California explains miners' daily lives.

Consider:  What type of people would be comfortable living the life of a miner?  How is gold mining like gambling?  Why would a mining town be the perfect home for a person like Jim Smiley, and why would Jim Smiley be attracted to a gold miner's life? 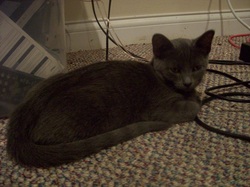 Indy and his (almost) body-length tail...
In the short story, we learn that Jim Smiley gives two of his animals famous political names.  Andrew Jackson is the name of the "little small bull-pup," and that the "celebrated jumping-frog" himself is named Dan'l [Daniel] Webster.  In reality, Andrew Jackson was the seventh President of the United States (he was President from 1929-1837), and Daniel Webster was a Senator from Massachusetts during the years leading up to the Civil War.

People often name their pets based on the pets' physical or behavioral characteristics.  For example, Mrs. Britten has a cat named "Indy";  Indy has a particularly long tail that reminded her husband of Indiana Jones' famous whip.   As readers, we might wonder where the names of Jim Smiley's pets came from.  Did he name them after famous political figures because the pets and the people had some kind of characteristic in common?  It's quite possible.

Consider:  Andrew Jackson's nickname was "Old Hickory."  Why was he given that nickname?  Why would the bulldog pup have been given the name "Andrew Jackson"?

To understand the choice of the name Daniel Webster, you should know that the real-life Daniel Webster was a politician who was very educated and also highly-regarded for his public speaking skills.  In the short story, we learn that the frog named Daniel Webster is also educated -- at least in terms of jumping and catching flies.

The real Daniel Webster was well-known to be involved in the slavery debate and the creation of slavery-related laws in the American government before the Civil War.  **He was not solely responsible for the practice of slavery in the U.S.!**  At the time, the rule was that when a new state was created and added to the United States, it would either be a slave state or a non-slave state depending on what "turn" it was, to keep the balance of slave- and non-slave states admitted to the United States somewhat equal.  The interesting fact is that the new states created in the American West were not interested in being slave states -- even if the law said they had to be because it was a slave state's "turn".  Despite the law, these states were allowed to join the United States as non-slave states.  The "common people" won over the highly-educated politicians.

Consider:  How is the situation with the common people and politicians similar to the competition between the stranger's frog and Dan'l Webster? 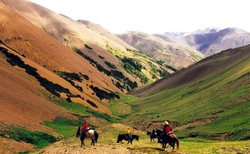 Local color literature is fiction and poetry that focuses on the characters, dialect, customs, geographical setting, and other features particular to a specific region.  Between the Civil War and the end of the nineteenth century, this style of writing became dominant in American literature.  According to the Oxford Companion to American Literature, "In local-color literature one finds the dual influence of romanticism and realism, since the author frequently looks away from ordinary life to distant lands, strange customs, or exotic scenes, but retains through minute detail a sense of fidelity and accuracy of description." (439)

Setting:  The emphasis is frequently on nature and the limitations it imposes;  settings are frequently remote and inaccessible.  The setting is integral to the story and may sometimes become a character in itself.

Characters:  Local color stories tend to be concerned with the character of the district or region rather than with the individual: characters may become character types, sometimes quaint or stereotypical.  The characters are marked by their adherence to the old ways, by dialect, and by particular personality traits central to the region.  In women's local color fiction, the heroines are often unmarried women or young girls.

Narrator:  The narrator is typically an educated observer from the world beyond who learns something from the characters while preserving a sometimes sympathetic, sometimes ironic distance from them.  The narrator serves as mediator between the rural folk of the tale and the urban audience to whom the tale is directed.  **This characteristic is very obvious in "The Celebrated Jumping-frog of Calaveras County".**

Plots:  It has been said that "nothing happens" in local color stories by women authors, and often very little does happen. Stories may include lots of storytelling and revolve around the community and its rituals.

Themes:  Many local color stories share an antipathy to change and a certain degree of nostalgia for an always-past golden age.  A celebration of community and acceptance in the face of adversity characterizes women's local color fiction.  Thematic tension or conflict between urban ways and old-fashioned rural values is often symbolized by the intrusion of an outsider or interloper who seeks something from the community.